skip to main | skip to sidebar

At age 6 my mother let me into the kitchen, alone. By seventh grade I was feigning sick to stay home from school, "miraculously" feeling good enough to make baked-stuffed pork chops for dinner. My passion for cooking led me to a job as a sous chef in a Manhattan restaurant and, later, to stand quietly in the corner of (and eventually do one thing in) Restaurant Guy Savoy's kitchen in Paris. I overcame the ultimate cooking challenge when I made butter cream icing over a Bunsen burner at Mount Sinai Hospital in New York City. It was for a friend's wedding cake, the centerpiece at the reception the next day. It was midnight. With just hours to go, I managed to whip up the icing, then carefully place the last few candied violets onto the cake before the reception. Oh, how grateful I was for that Bunsen burner and the corner bodega that was open 24 hours.

It all worked out in the end. It always does.

Thank you for stopping in and being part of a growing dinner party of readers.

Time was ticking and the potato salad still was not made. The potatoes were boiling, and while I waited for them to be done, I filled the chocolate cake layers with a raspberry filling and iced it with thick chocolate frosting, as requested. I was preparing for a casual cookout for a loved one's birthday. Loved One didn't want to make a big deal over it; I did. But to honor the Birthday Boy I held back, sort of. I didn't get balloons. Instead of fresh flowers as a centerpiece for the table I used potted basil. All in all, we kept it low key, including the potato salad. Normally, I would attempt my mother's famous potato salad where she uses hard-boiled eggs, mayo, red onion, and celery -- all the classic ingredients that make a rich salad, delicious. I didn't have the time or the inclination for that. Mine would employ spring: fresh chives from the garden. As a child I discovered chives growing between rocks in a lawn, although at the time I didn't know that's what these thin spikes of bright green-ness with an oniony flavor were called. They're delicate sharpness is a nice complement to the creamy potatoes. After the cookout, Loved One was describing the meal -- a small sign that I had done good -- on the phone. "Yeah, and she made this potato salad, I think it's a family recipe, really good." A new family recipe, anyway. Oh, and I did whip out the red party hats stuffed in the back of the cupboard. For a brief moment we all wore them, even the dog.

1. Boil the potatoes, with skins on, until tender, not mushy, about 15-20 minutes. Drain and let cool about 20 minutes.
2. Put potatoes in a medium size bowl. While still warm, sprinkle with olive oil and vinegar, lightly toss. Add salt and pepper, toss. Add chives.
3. Adjust flavorings by adding more olive oil, or vinegar or salt and pepper. Heck, add more chives, too.
4. Serve chilled or room temperature.

PICNIC NOTE: The nice thing about this potato salad is you don't have to worry about the mayo getting hot in the sun because there is no mayo in this recipe.

HASH-BROWN LEFTOVERS: Refrigerate the leftovers. For great hash browns, heat olive oil in a skillet and add 1 Tbsp. chopped onions, cook until golden. Over high heat, add the potato salad and sauté until golden, keep moving the potatoes around so they brown. Nice with a chive and goat cheese omelet.

Let's give it up for lamb

In one corner, small, lean rib lamb chops from New Zealand. In the other corner, nearly one-inch thick fatty loin lamb chops from the U.S. of A. All pieces of meat are smeared with extra virgin olive oil, salt and freshly ground black pepper. This was no ordinary dinner.

A recent story I wrote for The Boston Globe got me hungry – and curious. I interviewed butchers and restaurateurs about the differences between American produced lamb versus lamb from New Zealand. “Shall I do a taste-test?” I asked my editor, half hoping she’d say no because it would mean more work. She said no, but my curiosity got me cooking.

After a trip to John Dewar’s in Wellesley for the American chops, and a stop at Whole Foods for the New Zealand chops, I settled for indoor grilling. In the perfect world I would have made sure each cut was identical; but in this imperfect world, I took what I could get: ribs from New Zealand, loins from America. Only Freud could make sense of that.

My Dining Companion and I dug in. "This one is sharper,” he said, taking a bite out of the New Zealand chop.

“It’s grass fed,” I explained. It was “sharp” or, as some describe the taste, “gamey”. It was the way lamb should taste, I thought, the way I remember it tasting as a child when I needed a spoonful of mint jelly to go with. Now I closed my eyes, chewed. Sheep grazing on far away fields, gathering the mustiness of the earth. Rich.

“American lamb sometimes eats grass,” I offered, “but mostly grain, like we feed our cattle.”

“No, they don’t,” I said, cutting into the American lamb chop that was more like a steak in every way: It was thick and juicy, and the taste – if I had closed my eyes I would have been hard-pressed to call it lamb because it tasted very close to beef.

“It’s not just the wool,” my Dining Companion started philosophizing, uncharacteristically, about the animal we were eating. “They really give it up.”

Grilled lamb is best with….asparagus from the U.S., coated in extra virgin olive oil, sprinkled with salt and pepper, and grilled. Try this for a sandwich: Mix goat cheese with finely chopped rosemary and roasted red pepper. Smear it on a baguette; slice the lamb, top with lemon-kissed arugula, voila.
Posted by Naomi Kooker at 2:48 PM No comments:

Turning the heat on chili 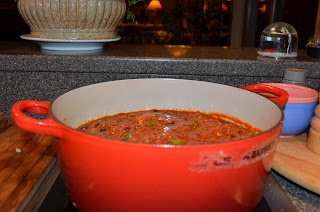 One snowy Sunday I promised my boyfriend, Chris, I'd make chili for dinner. But when dinner time came around, no chili. I still needed to shop for the ingredients. Tired and cranky, yet wanting to keep my promise (and eat), I set out for the supermarket, windshield wipers clearing away the snow; I was determined to keep it simple. The chili turned out to be so easy I made it four more times -- not in a row. It became such a staple my oldest nephew, David, a burgeoning foodie in college, wrote me in an email that he’d rather be eating my jalapeno chili than studying. Stick to the books, I said, and chili will be your reward. One day David will make it himself.

DIRECTIONS:
In a large pot with thick bottom – ideally Creuset cookware – put in the oil. Add garlic and onion. Stir and cook over medium-low heat until translucent, about 3 to 5 minutes. Make sure the heat is medium low so the garlic does not brown or burn. Add the green pepper and jalapeño, and 2 Tbsp. of the chili powder and cumin. Stir and cook until tender, about another 5 minutes.

Push mixture aside and add ground beef to the same pot, breaking it up with a wooden spoon so it cooks over medium-high heat. Once the meat is mostly cooked, blend together with garlic, onion and pepper mixture. Add the beans. Stir in the crushed tomato; add the whole plum tomatoes and liquid, breaking the tomatoes up with a spoon or your fingers. Add the corn. Stir in an additional tablespoon of chili powder, add the bay leaf and salt and pepper to taste. Adjust by adding more chili powder or more salt and pepper.

Cover and cook over low heat for one half hour or longer, stirring often. Serve with shredded cheddar cheese and sour cream. Add corn chips or corn bread for accompaniment and you have a meal. Perfect for Sunday football.
This also freezes well. Cool and freeze in airtight plastic containers for up to one month. Reheat in microwave per instructions or slowly heat over stove in saucepan.

COPYRIGHT 2009. NAOMI KOOKER. ALL RIGHTS RESERVED.
Posted by Naomi Kooker at 9:48 AM No comments: